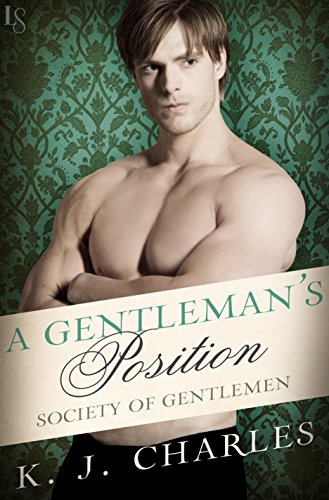 A Society of Gentlemen Novel

Power, privilege, and the rigid rules of class leave two hearts yearning for connection in the sizzling new Society of Gentlemen novel from K. J. Charles.

Among his eccentric though strictly principled group of friends, Lord Richard Vane is the confidant on whom everyone depends for advice, moral rectitude, and discreet assistance. Yet when Richard has a problem, he turns to his valet, a fixer of unparalleled genius—and the object of Richard’s deepest desires. If there is one rule a gentleman must follow, it is never to dally with servants. But when David is close enough to touch, the rules of class collide with the basest sort of animal instinct: overpowering lust.

For David Cyprian, burglary and blackmail are as much in a day’s work as bootblacking—anything for the man he’s devoted to. But the one thing he wants for himself is the one thing Richard refuses to give: his heart. With the tension between them growing to be unbearable, David’s seemingly incorruptible master has left him no choice. Putting his finely honed skills of seduction and manipulation to good use, he will convince Richard to forget all about his well-meaning objections and give in to sweet, sinful temptation.

Anyone who has read one of KJ Charles’s Society of Gentlemen novels is familiar with the small grouping of men who prefer men in 1820s London. The very wealthy and sophisticated man who is the clear leader of this group is Lord Richard Vane, and that Lord Richard Vane has a valet named David Cyprian. Cyprian is brilliant, clever, and able to manipulate social norms to solve any problem. You may remember from other novels that he is able to manipulate almost any power in Regency-era London to see to it that his aim is accomplished.  Given that these are all stories of love, one might wonder whether Richard and Dave have love objects. In this novel you learn that Richard once loved Dominic Frei, but something had driven was to asunder. Richard in the meantime had not had another lover for many years. You quickly discover that he has been in love with his servant, David, but feels strongly that he cannot rely on the servant’s ability to say no to the boss. He won’t make a move on David for fear David would say yes but mean no.

Then Richard receives a letter from his estranged brother whose wife left their marriage, thanks to the inequality of their status and their marriage, with their son to go to live in Yorkshire. Richard has always felt uncomfortable about this, and although his brother Philip is not interested in his mother, he decides to go and see her. It turns out that she was dying of cancer and had just died. He is devastated by the shock. He has David Winningham, and David, moved by the tragedy, comforts Richard. Richard is horrified to realize that he has broken his own vow not to take advantage of his servant. The two return to London and not long after have an encounter where David insists on intimate contact with Richard. Richard is so horrified again that he tells David he is dismissing him. David leaves that very day goes to his mother and her new husband’s house. Richard discovers where David is and tries to apologize, to explain that he did not mean to dismiss him, and to explain his concerns about their inequality. David is more horrified than anything, and tells Richard that if he can’t see them as equals, then there is no point in a relationship. Richard is forced to return to London without David.

As it happens, the Society of Gentlemen run into your revelation of their activity, and luckily this means that David must be summoned to solve their problem. This gives Richard and David a chance to have a good heart-to-heart, and you know that there will be further problems about the group.

I found this tale quite attractive and charming, but most of all what I loved was the first time Richard and David make love. You can tell from the novel that the two have had an intense romance in spite of not being aware of it. The love that Richard makes to David, and David to Richard, is beautiful and heartfelt. It is that much more poignant knowing that it isn’t going to last chapter. This particular novel won me over to KJ Charles’s Society of Gentlemen novels. I am looking for the fifth or sixth one to complete my readings.

FAGIN’S BOY by CHRISTINA E. PILZ »
« SWIFT FOR THE SUN by KAREN BOVENMYER