Review: ACROSS THE EAST RIVER BRIDGE 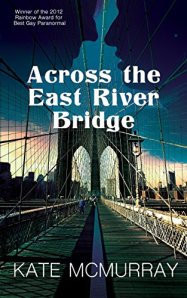 ACROSS THE EAST RIVER BRIDGE

Winner of the 2012 Rainbow Award for Best Gay Paranormal

When historian Christopher Finnegan walks into a new museum in Brooklyn, he’s chagrined to learn its curator is his old academic rival, Troy Rafferty. Worse, Troy is convinced the museum is haunted and wants Finn’s help learning more about the ghosts. Finn and Troy have never gotten along and Finn wants to run screaming, but then Troy offers him an intriguing proposal: Troy will help Finn a research project for his overbearing boss if Finn will help Troy solve a mystery involving two men who died in the building under mysterious circumstances in 1878.

Finn and Troy piece together the two men’s lives—and the quiet romance that grew between them—through diaries, newspaper clippings, and police reports. They’re both soon convinced the men were murdered. They’re also convinced the ghosts are real—even Finn witnesses paranormal phenomena he can’t deny—and that they’re capable of affecting thoughts, feelings, and actions. When Finn and Troy start falling for each other despite years of animosity, Finn worries he’s being manipulated by the ghosts to stay with Troy and solve the case. Troy is convinced the love between them is real, but he’ll need to figure out how to get rid of the ghosts in order to prove it.

I am admittedly not a big fan of contemporary novels. That is simply how devoted I am to the historical. But as I have read over the years I’ve discovered there is a subgenre that allows me the best of both. A contemporary novel can have a paranormal theme, time travel, or other clever techniques for getting across the differences between GLBT lives in the past and now. In Kate McMurray’s book, she combines a compelling story of a relationship between two men who were at a disadvantage from the beginning when one resented the other for his academic prowess. That they are historians starts us on the right path. That the building where one of them lives is haunted by a couple of gay men from the 1870s completes it.

What I truly loved about this novel is that it offered me the contrast between gay love in the last century or two and now, but with the complications that are possible for both. This happens to be a topic of great interest to me. Having seen all the stories about how two men could love each other in the past, something that is obviously not true, I appreciated the chance to see the stories side by side that reveal how complex the relationships can be no matter the era. Teddy and Wash are two troubled men who have discovered that they love and desire the other in the 1870s. McMurray gives us a look into how someone who is in fact perfectly normal but can’t possibly know that in the 1870s might manage to come to accept their relationship.  In the isolation of their lives together they can come to accept that they love each other, but unfortunately in the time when they live there is no support outside the relationship. In fact in this case, social attitudes toward gay people are what brings the climax in the two men’s lives together. In the meantime our contemporary academics, Finn and Troy, live in a time where they can find some support for their relationship. What is well done in this novel is that it is not however perfect. The nature of their relationship is that their personalities keep them apart as long as possible. McMurray also shows them in public situations such as at restaurants hesitating to reach for each other’s hands, as well as other situations where they worry about violence. I have to say I appreciated the reminder that we still live in a hostile time.

I know enough about this era to be aware that these men are contemporaries with Walt Whitman, the American poet who wrote about his love for men and was rather bold about it. I kept wishing that the two men in this story would run across him. Unfortunately that never happened, but a less celebratory encounter with a gay-bashing religious zealot does.

The story is both a realistic contemporary novel but it has haunting that might stretch the story too far for the reader. I accepted what happens in the novel as remotely possible and certainly important for the story itself. This is a whodunit that is satisfied at the last minute in the book. I have to say that though very sad, the resolution is truly what one needed in this book.

As I said the part of this book that most satisfied me was the complex comparison of the 1870s and 2010s relationships with all their glory and trouble. Letting the two academics experience not only through journals but through dreams and haunted memories allows the reader to feel so much more because McMurray handles it so well.