Review: WILL AND THE VALENTINE SAINT 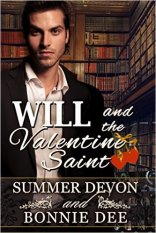 REVIEW:  WILL AND THE VALENTINE SAINT

by Summer Devon and Bonnie Dee

A Valentine bonbon from Devon/Dee.

Will Andrews wishes to escape the craziness of his bohemian family and create some order in his life. Hiding his eccentric theater background and presenting false letters of recommendation, he interviews for a position at a legal aid society. The last thing he expects is to fall hard for his genteel employer, Hugh St. John.

When Hugh needs a secretary, one magnetic candidate draws him. Will Andrews shares his vision for the Society and is also the most attractive man he’s ever met. But Hugh has never even kissed a man and would never throw himself at an employee.

As the pair plans a Valentine charity dinner, they grow ever closer to surrendering to Cupid’s arrow. But when Will’s false credentials and true background are revealed, can Hugh forgive his lies and omissions? Can fragile romance blossom into true love after trust is broken?

The latest in the series of Devon/Dee Victorian love stories involves the Andrews, a family of play actors and their hangers-on, one of whom finds love with the Uranian middle- or upper-class man of his dreams.

Will is different from his siblings and others in that he wants a normal job and no doubt a normal lover. He doesn’t want to be part of the theater crowd, as much as he loves the theater. To get the job he wants he forges a number of references and shows up at Hughes’ door and wows him with his creativity. Since it is Devon/Dee, you know that the relationship is going to be with his male boss. When the two of them put on a marketing luncheon staffed entirely by Andrews family types, it does not turn out to be a disaster. It turns out quite well, actually, and you can hope for the same for these two lovers.

It sure is fun to meet each of the siblings, all of whom are very unique individuals, and how they manage in the world.

Review: SIMON AND THE CHRISTMAS SPIRIT »
« Review: A QUEER TRADE