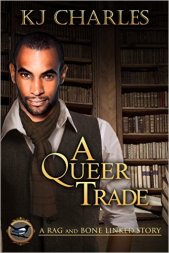 Apprentice magician Crispin Tredarloe returns to London to find his master dead, and his papers sold. Papers with secrets that could spell death. Crispin needs to get them back before anyone finds out what he’s been doing, or what his magic can do.

Crispin tracks his quarry down to waste paper dealer Ned Hall. He needs help, and Ned can’t resist Crispin’s pleading—and appealing—looks. But can the waste-man and the magician prevent a disaster and save Crispin’s skin?

A 16,000 word story set in the Charm of Magpies world, and a prequel to the novel Rag and Bone (March 2016). This story was first published as part of the Charmed & Dangerous anthology.

This short novel has one more new thing for me besides taking place in an alternate history involving magic: one of the main characters is a black man. I don’t know why this is so unusual, but I will give KJ Charles credit for making her book unique.

Crispin, who has been away for a few weeks, is summoned home at the death of his wizard master. When he arrives he learns that other relatives of his master have stripped the home of everything that they saw as rubbish. Crispin knows that the stacks of paper all over the floor, the furniture, everywhere, were not rubbish at all but highly valuable spells. He finds out that all the papers were sold to a shop that buys useless paper and finds useful purposes for it, such as wrapping fish, cushioning packages, you name it. When he arrives at the resale shop he meets Ned Hall, the black proprietor. Ned finds Crispin appealing and starts to help him look for the lost paper. When they go to the market to find at least part of the missing paper, the spells written on the sheets start to take effect. A combination of hot tempers and actual fire make chaos of the scene. It is then that Ned and Crispin know they have a problem. They have to retrieve what they can of the papers and reverse the spells.

Ned’s growing affection for Crispin and Crispin’s open interest in Ned turn this fast-paced and mysterious tale to a love story quite quickly. This happens to be the sort of historical fantasy where the history is simple and straightforward but simply has a layer of magic applied to it. That’s my favorite type.

Review: WILL AND THE VALENTINE SAINT »
« Review: SEDUCING STEPHEN