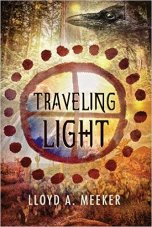 TRAVELING LIGHT by Lloyd A Meeker

Ian McCandless is a hospice nurse, training to become a shaman. When his mentor orders him to make peace with his estranged family, Ian reluctantly agrees, anticipating another conflict-filled visit. On their way from the airport, Ian’s older brother Will interrupts a convenience store robbery and is shot. As he dies in Ian’s arms, Will begs Ian to avenge him.

Ian uses his shamanic abilities to track down the killer, but his quest soon becomes a hunt for revenge—forbidden to any shaman. His actions jeopardize his relationship with the spirit-world, endanger the lives of those he loves, and threaten to banish him from the path that gives his life meaning. Ian must choose between vengeance and service to community as the root of his shamanic covenant. Evil or noble, every choice is sacred to the Great Web, and every choice has consequences.

Ian is a student of a shaman, but in a visit home to see his family death throws him entirely off-kilter.  He sees his brother, who scoffs at his shamanic calling, killed in a robbery.  A combination of the emotional impact and his desire for revenge interferes with his graduation into full shamanic power.  He struggles with the precepts of the training, including the basic teachings of shamanism, and that is not to try to force it into self-serving purposes, as in trying to solve the murder of his brother.  It seems as if the trauma of losing the very brother he was trying to connect with is what throws Ian into his quagmire.

His first shamanic journey after his trauma is to the cave of a pre-Columbian American community, whose main shaman is trying to find how to return his world to balance, but as you read you discover the fellow has done something that got him denied wisdom essential to resolving the problem.  The shaman’s student , Ta-Kuat, is the one Ian connects with, a young man whose shaman intends to sacrifice to get access to the secret he so longs for.  In the meantime Ian and the boy find each other in different times and circumstances and start to bond.  They are in essence leaning the shaman’s path together.

The story takes place in modern Vancouver, British Columbia, and the location that the boy lives in pre-Columbian America.  Further, there are other places, real or imagined, where Ian encounters a raven, a strange mad woman, and other spirit beings, some of whom help him while others try to trick him.  This is in contrast to the work he is doing on a Monday and level where he helps an old woman resolve issues from her past as she is dying, and helps a gay man who is dying of AIDS to come to some peace.

The mysterious journey continues to fascinate the reader as he or she sees the elements of modern times and concerns with the strange world of the shamanic journey.  The story is well told and the author’s imagination is tremendous.

Review: MIKE AND THE SPRING AWAKENING »
« Review: THE PRIVATE SECRETARY