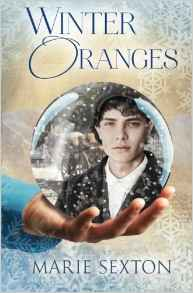 A Love for the Holidays charity novel

Jason Walker is a child star turned teen heartthrob turned reluctant B-movie regular who’s sick of his failing career. So he gives up Hollywood for northern Idaho, far away from the press, the drama of LA, and the best friend he’s secretly been in love with for years.

There’s only one problem with his new life: a strange young man only he can see is haunting his guesthouse. Except Benjamin Ward isn’t a ghost. He’s a man caught out of time, trapped since the Civil War in a magical prison where he can only watch the lives of those around him. He’s also sweet, funny, and cute as hell, with an affinity for cheesy ’80s TV shows. And he’s thrilled to finally have someone to talk to.

But Jason quickly discovers that spending all his time with a man nobody else can see or hear isn’t without its problems—especially when the tabloids find him again and make him front-page news. The local sheriff thinks he’s on drugs, and his best friend thinks he’s crazy. But Jason knows he hasn’t lost his mind. Too bad he can’t say the same thing about his heart.

This novel is not exactly historical but is a contemporary tale of a sort of time travel, which of course I count.  Actor Jason has gone to live in an isolated house in Idaho.  He keeps seeing an image of a young man in a window of one of his outbuildings.  When he goes to investigate, he finds a good-looking but oddly dressed man who is able to communicate some significance to a snow globe on a shelf in the building.  Jason discovers that if he winds the snow globe the fellow can talk to him.  As a result, he learns the man is Benjamin and that to prevent him from entering the Civil War, his sitter managed a magical spell that trapped him inside the globe.

Benjamin has been able to project himself outside the globe enough that he can watch whatever is going on around him, and as a result he had watched literally thousands of hours of television and, before that, listened to radio.  He is therefore well acquainted with American pop culture and the news of the day.  Jason’s growing affection for Benjamin allows him to consummate their love through a sort of dangerous overlapping of their two worlds, but in the meantime Jason’s friend and the local sheriff begin to wonder if he is losing his mind.  Jason will need to figure out how to free Benjamin from the globe or be taken to the loony bin.

The best part of this tale is its originality and after that the portrayal of the character Benjamin who is both limited in scope and remarkably well acquainted with the world.  I recommend this time travel story for the sake of its charming mystery and its heartwarming sentiment.

Review: OUT OF THE BLUE »
« REVIEW: THE SALLEE ROVERS