REVIEW: STARS AND STRIPES: A BEDTIME STORY by Susan Laine 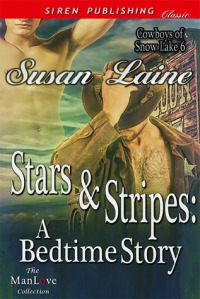 STARS AND STRIPES: A BEDTIME STORY

Framed as a bedtime story a modern-day cowboy sheriff tells his restless bedmate, this simple tale of the American West of the late 1800s is full of charm and sexy scenes.

Sheriff Lincoln “Linc” Redding must catch an escaped thief hiding in the nearby woods of Snow Lake.  He is uneasy as the way the whole crime and escape has the stink of rotten eggs about it.  When he catches up with the man, Ned Dove, garbed in prison stripes, they camp for the night under a sky full of stars.  An attempted ambush by a trio of thugs convinces Linc that the story Ned’s been telling him of a set up may be true.  In the meantime he is drawn to Ned like no man for a very long time, but hearing that Ned has a lady friend puts the cap on that hope even if he could afford to act on it.  Back in town Linc leaves a very satisfied Ned in his bed to investigate his suspicions about the frame up.  When he and Ned both find themselves prisoners in a deep cellar, revelations shock even the cynical sheriff.

In spite of its deceptively simple plot, this story has both adventure and a sweetness that invests the reader in these well-drawn characters.  In addition to the two lovers, a hard-bitten world-weary yet hopeful lawman and a guileless young Easterner, you have a sinister cavalry officer, a spoiled rotten rich kid, a scheming brothel madam, and a fine upstanding city father, all in character, or lack of character, from first to last seen.  The story which is available as a complete download is not the intellectual challenge some might prefer, but it is highly entertaining and charmingly memorable.

REVIEW: DECEIVERS, THE by Mel Keegan »
« REVIEW: TIPPING THE VELVET by Sarah Waters